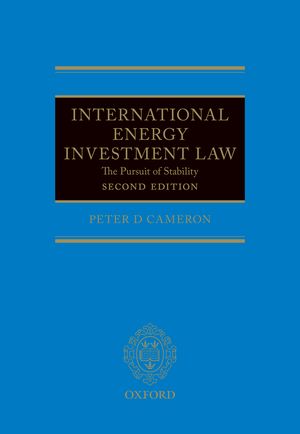 The second edition of International Energy Investment Law: The Pursuit of Stability has been revised, updated, and expanded from the successful first edition to broaden coverage of the energy sector. As well as adding coverage of renewable energy, unconventional oil and gas, and issues in gas pricing, the second edition makes current arbitral awards and cases before ICSID and other arbitral tribunals and bodies, and includes a chapter on damages and a new case study on energy in Africa.

At a time of unprecedented growth in arbitrations between investors and States over energy resources, the second edition of International Energy Investment Law: The Pursuit of Stability examines and assesses the variety of contract- and treaty-based instruments in commercial and international law that strive to protect the respective interests of investors and States in the international energy industry. It covers most forms of energy, especially oil and gas, and considers issues arising from energy network operation including transit. It pays particular attention to their practical impact through an analysis of their enforcement by arbitration tribunals and bodies, such as the ICSID, the ICC and the LCIA.

The book also examines growing challenges presented by environmental and human rights concerns to the stability of long-term agreements. Investors in the international energy industry have long sought to secure guarantees from host States to mitigate the risk of unilateral revision of the deal at a future date. In recent years the traditional method of securing such guarantees has been supplemented by an unprecedented growth of international investment law in the form of BITs, MITs and other treaty-based instruments. Many States have also introduced guarantees into their domestic legislation. This multi-tier regime of stability has fundamentally altered the legal framework for energy investors and host States and offers extensive scope for international arbitration in the event of disputes. It is a system that is currently being tested in a number of high-value commercial disputes as a result of a wave of unilateral State action, most evidently in Latin America, Africa, and East Europe. The protections for investors are being tested as arbitrators develop new notions of legitimate expectations and give content to fair and equitable treatment, while mapping out more precisely the duties which investors have to host States.

This book examines critically the interaction contract and treaty forms of stability in the new multi-tier setting, including three highly detailed regional case studies of Latin America, Africa, and East Europe. In its concluding section, it examines damages in energy cases and questions of stability across energy sub-sectors.