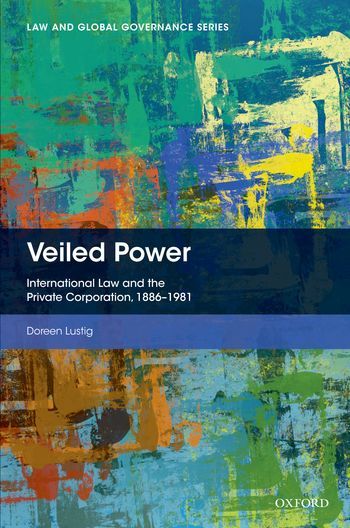 By weaving together five in-depth case studies - Firestone in Liberia, the Industrialist Trials at Nuremberg, the Anglo-Iranian Oil Company, Barcelona Traction and the emergence of the international investment law regime - a variety of contexts are covered, including international criminal law, human rights, natural resources, and the multinational corporation as a subject of regulatory concern. Together, these case studies offer a multifaceted account of the history of corporations in international law over time.

The book seeks to demonstrate the facilitative role of international law in shaping and limiting the scope of responsibility of the private business corporation from the late-nineteenth century and throughout the twentieth century. Ultimately, Lustig suggests that, contrary to the prevailing belief that international law failed to adequately regulate private corporations, there is a history of close engagement between the two that allowed corporations to exert influence under a variety of legal regimes while obscuring their agency.

Contents:
Introduction
1: Liberia, Firestone, and the End of Slavery as a Political Cause: Between the Weak State and the Unruly Corporation 1926-1934
2: The Nature of the Nazi State and the Responsibility of Corporate Officials at Nuremberg
3: Without the Corporate Entity? Theories of Corporate Authority and their Implications for Business Responsibility at Nuremberg
4: Back to Informal Empire? The Anglo-Iranian Struggle over Oil, 1932-1954
5: From the NIEO to the International Investment Law Regime: The Rise of the Multinational Corporation as a Subject of Regulatory Concern in International Law
Conclusion

The Rise of the Regulatory State of the South: The Infrastructure of Development
Edited by: Navroz K. Dubash, Bronwen Morgan
ISBN 9780199677160
Published July 2013
Oxford University Press
£110.00