The Battle for International Law: South-North Perspectives on the Decolonization Era 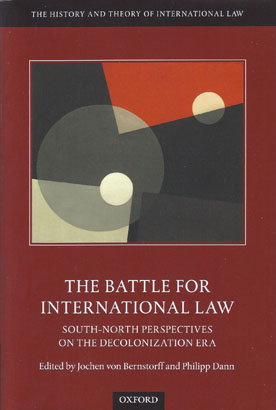 This volume provides the first comprehensive analysis of international legal debates between 1955 and 1975 related to the formal decolonization process.

It is during this era, couched between classic European imperialism and a new form of US-led Western hegemony, that fundamental legal debates took place over a new international legal order for a decolonised world. The book argues that this era presents in essence a battle, a battle that was fought out in particular over the premises and principles of international law by diplomats, lawyers, and scholars.

In a moment of relative weakness of European powers, 'newly independent states' and international lawyers from the South fundamentally challenged traditional Western perceptions of international legal structures engaging in fundamental controversies over a new international law. The legal outcomes of this battle have shaped the world we live in today.

Contributions from a global set of authors cover contemporary debates on concepts central to the time, such as self-determination, sources and concessions, non-intervention, wars of national liberation, multinational corporations, and the law of the sea. They also discuss influential institutions, such as the United Nations, International Court of Justice, and World Bank. The volume also incorporates contemporary regional approaches to international law in the 'decolonization era' and portraits of important scholars from the Global South.

Series: The History and Theory of International Law

The Right of Sovereignty: Jean Bodin on the Sovereign State and the Law of Nations
Daniel Lee
ISBN 9780198755531
Published August 2021
Oxford University Press
£80.00

From Slaves to Prisoners of War: The Ottoman Empire, Russia, and the Making of International Law
Will Smiley
ISBN 9780198785415
Published September 2018
Oxford University Press
£81.00