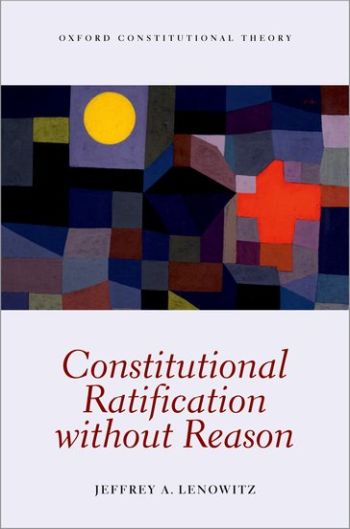 This volume focuses on constitutional ratification, the procedure in which a draft constitution is submitted by its creators to the people or their representatives in an up or down vote determining implementation. Ratification is increasingly common and routinely recommended by experts. Nonetheless, it is neither neutral nor inevitable. Constitutions can be made without it and when it is used it has significant effects. This raises the central question of the book: should ratification be recommended? Put another way: is there a reason for treating the procedure as a default for the constitution-making process? Surprisingly, these questions are rarely asked. The procedure's worth is assumed, not demonstrated, while ratification is generally overlooked in the literature. In fact, this is the first sustained study of ratification.

To address these oversights, this book defines ratification and its types, explains the procedure's effects, conceptual origins, and history, and then concentrates on finding reasons for its use. Specifically, it builds up and analyzes the three most likely normative justifications. These urge the implementation of ratification because the procedure: enables the constituent power to make its constitution; fosters representation during constitution-making; or helps create a legitimate constitution.

Ultimately, these justifications are found wanting, leading to the conclusion that ratification lacks a convincing, context-independent justification. Thus, until new arguments are developed, experts should not give recommendations for ratification as a matter of course, practitioners should not reach for it uncritically, and-more generally-one should avoid the blanket application of concepts from democratic theory to extraordinary contexts such as constitution-making.