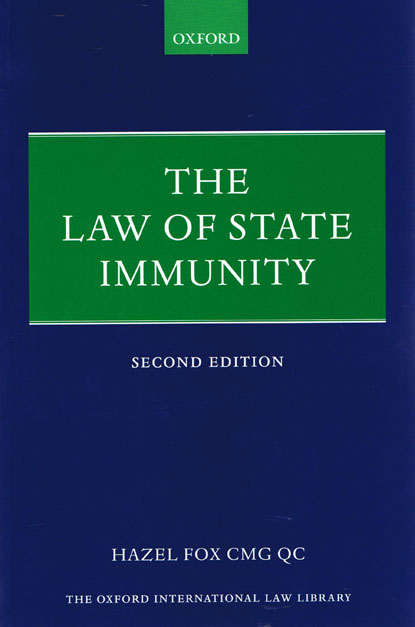 The doctrine of State immunity bars a national court from adjudicating or enforcing claims against foreign states. This doctrine, the foundation for high-profile national and international decisions such as those in the Pinochet case and the Arrest Warrant cases, has always been controversial. The reasons for the controversy are many and varied. Some argue that state immunity paves the way for State violations of human rights. Others argue that the customary basis for the doctrine is not a sufficient basis for regulation and that codification is the way forward. Still others argue that even when judgements are made in national courts against other states, the doctrine makes enforcement of these decisions impossible.

This fully restructured new edition addresses all of these issues by reference to the United Nations Convention on Jurisdictional Immunities of States and their Property. Through a detailed examination of the sources of law and of English and US case law, and a comparative analysis of other types of immunity, Hazel Fox explores both the law as it stands, and what it could and should be in years to come.

Contents:
Introduction
PART I: THE STRUCTURE OF STATE IMMUNITY
1. State Immunity as a Rule of International Law
2. Institution of Proceedings and the Nature of the Plea of State Immunity
PART II: GENERAL CONCEPTS IN STATE IMMUNITY
3. The Concept of the State and the Justification for Immunity
4. Theories Relating to State Immunity and the Concept of Jurisdiction
5. Jus Cogens
6. Immunity, Acts of State, and Non-Justiciability
PART III: SOURCES OF THE LAW OF STATE IMMUNITY
7. Treaty Practice, Projects for Codification, and Municipal Law as Sources
8. The Restrictive Doctrine
9. National Legislation: The US FSIA and UKSIA
10. Other Immunities
PART IV: THE CURRENT INTERNATIONAL LAW
11. The Rule of Immunity under the UN Convention
12. Consent of the Foreign State
13. Definition of the State
14. Exceptions to State Immunity
15. Exceptions under the UN Convention
16. Execution and Procedure
PART V: CONCLUSIONS
17. Conclusions and Future Models