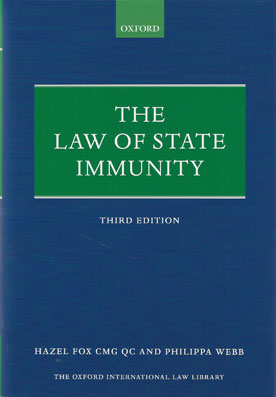 The doctrine of state immunity bars a national court from adjudicating or enforcing claims against foreign states. This doctrine, the foundation for high-profile national and international decisions such as those in the Pinochet case and the Arrest Warrant cases, has always been controversial.

The reasons for the controversy are many and varied. Some argue that state immunity paves the way for state violations of human rights. Others argue that the customary basis for the doctrine is not a sufficient basis for regulation and that codification is the way forward. Furthermore, it can be argued that even when judgments are made in national courts against other states, the doctrine makes enforcement of these decisions impossible.

This fully restructured new edition provides a detailed analysis of these issues in a more clear and accessible manner. It provides a nuanced assessment of the development of the doctrine of state immunity, including a general comprehensive overview of the plea of immunity of a foreign state, its characteristics, and its operation as a bar to proceedings in national courts of another state.

It includes a coherent history and justification of the plea of state immunity, demonstrating its development from the absolute to the restrictive phase, arguing that state immunity can now be seen to be developing into a third phase which uses immunity allocate adjudicative and enforcement jurisdictions between the foreign and the territorial states. The United Nations Convention on Jurisdictional Immunities of states and their Property is thoroughly assessed.

Through a detailed examination of the sources of law and of English and US case law, and a comparative analysis of other types of immunity, the authors explore both the law as it stands, and what it could and should be in years to come.