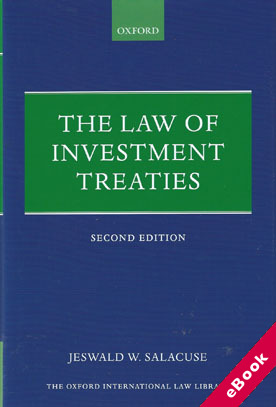 
ISBN13: 9780191009150
Published: June 2015
Publisher: Oxford University Press
Country of Publication: UK
Format: eBook (ePub)
Price: Out of print
The amount of VAT charged may change depending on your location of use.

The rapid growth in investment treaties has led to a burgeoning number of international arbitration decisions that have applied and interpreted treaty provisions in disputes between investors and states concerning their respective rights. This flurry of treaties and arbitral decisions has seen the creation of a new branch of international law- the law of investment claims.

Investment treaty law is a rapidly evolving field and since publication of the first edition, the law of international investment treaties has both experienced considerable growth and generated extensive controversy. 2011 saw the highest number of new treaty-based arbitration filed under international investment agreements to date, and in July 2014, the Yukos Universal Limited (Isle of Man) v The Russian Federation culminated with awards of over US$50 billion; a historic record for any arbitration.

Controversy in this field has primarily revolved around the investor-state dispute settlement process, which as thus far involved at least 98 states as respondents.

Salacuse captures these developments in this updated edition, examining not only the significant growth in treaties, but the trends that have followed, and their effect on the content and evolution of the law of investment treaties. Specific topics include conditions for the entry of foreign investment and general standards of treatment of foreign investments; monetary transfers; operational conditions; protection against expropriation; dispossession and compensation for losses; dispute settlement, including negotiation, arbitration, and conciliation; and judicial proceedings.