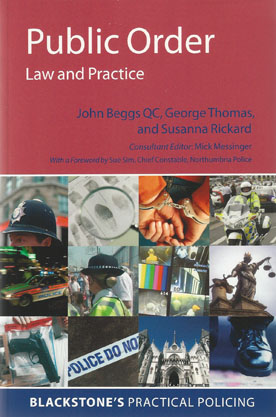 This book deals with the topical subject of public order policing and covers both the legal and practical aspects. The book is divided into two parts, the first part deals with 'General Themes in Public Order Law' covering the legal rules and principles and the key legislation.

The second part covers 'Public Order Policing in Context' and looks at considerations in specific contexts, such as public protest.

Topics covered range from day-to-day problems such as drunken brawls and football offences to more serious issues such as violent protest and terrorism.

The importance and impact of human rights and the ECHR are directly addressed in the book. Extracts from the key legislation are included in the appendices and throughout the book, key points, best practice and pre and post incident checklists are included to ensure that the book is as practical as possible.

This book is part of the Blackstone's Practical Policing Series. The series consists of practical guides containing clear and detailed explanations of the relevant legislation, accompanied by practical scenarios, illustrative diagrams and useful checklists.