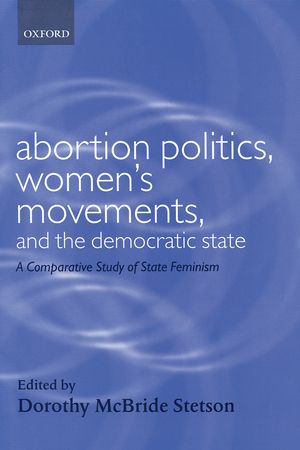 Abortion Politics, Women's Movements and the Democratic State examines the impact of women's movements since the 1960s on the policy-making processes determining abortion laws. The impact of women's movements is assessed in terms of their success in increasing the democratic representation of women generally and movement organizations specifically. Rather than asking 'how many women are in political office' this study asks 'to what extent are women included in the day to day;process of making decisions?' Of special interest in this project is the extent to which states, through establishment of women's policy agencies, have assisted, opposed, or ignored the demands of movement activists for access to power and for feminist abortion policies. Researchers have examined these;questions in policy debates over the last four decades in 11 advanced industrial democracies: Austria, Belgium, Canada, France, Germany, Great Britain, Ireland, Italy, the Netherlands, Spain, and the United States.;The findings of this cross-national longitudinal study document that women's movements have been successful in gaining both substantive and descriptive representation on abortion policy in a majority of the 32 debates studied. The ability of women's policy offices to provide a necessary and effective linkage between women's movement activism and increased democratic representation in policy- making varies both cross-nationally and over time. The openness of policy subsystems and the status of;the parties on the left are factors that interact with variations in movement cohesion and resources to account for these variations.