Institutions of Law: An Essay in Legal Theory 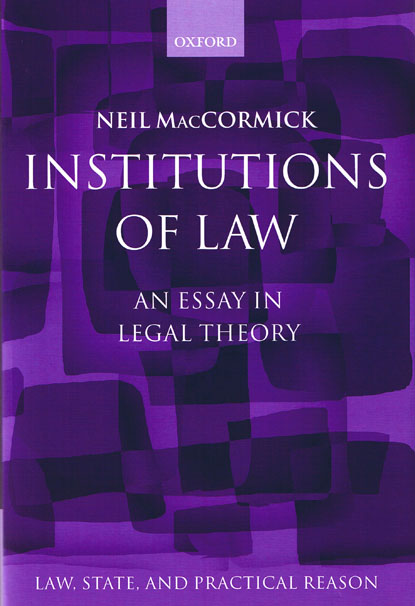 Using the framework of 'institutional normative order', MacCormick provides a rigorous analysis of the role of law in our society and understanding, showing how law creates the conditions for social peace and a functioning economy

Institutions of Law offers an original account of the nature of law and legal systems in the contemporary world. It provides the definitive statement of Sir Neil MacCormick's well-known 'institutional theory of law', defining law as 'institutional normative order' and explaining each of these three terms in depth. It attempts to fulfil the need for a twenty-first century introduction to legal theory marking a fresh start such as was achieved in the last century by H. L. A. Hart's The Concept of Law .

It is written with a view to elucidating law, legal concepts and legal institutions in a manner that takes account of current scholarly controversies but does not get bogged down in them. It shows how law relates to the state and civil society, establishing the conditions of social peace and a functioning economy. In so doing, it takes account of recent developments in the sociology of law, particularly 'system theory'. It also seeks to clarify the nature of claims to 'knowledge of law' and thus indicate the possibility of legal studies having a genuinely 'scientific' character. It shows that there is an essential value-orientation of all work of this kind, so that valid analytical jurisprudence not merely need not, but cannot, be 'positivist' as that term has come to be understood. Nevertheless it is explained why law and morality are genuinely distinct by virtue of the positive character of law contrasted with the autonomy that is foundational for morality.