This book is now Out of Print.
A new edition has been published, the details can be seen here:
The Anti-Suit Injunction 2nd ed isbn 9780198778936

The Anti-Suit Injunction with 1st Supplement 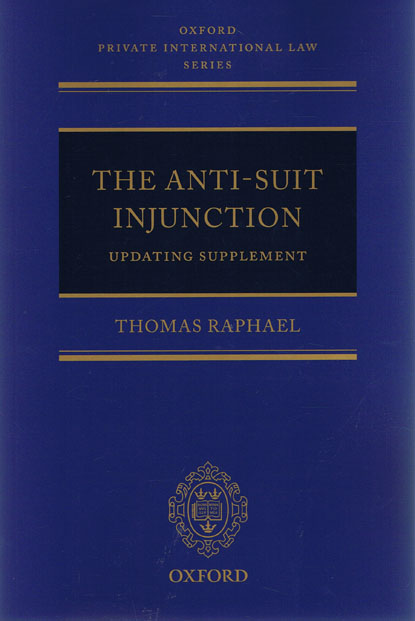 
Questions relating to anti-suit injunctions arise frequently in commercial practice, as commercial litigation is often disputed in several jurisdictions simultaneously. In these, circumstances, a party preferring to conduct its litigation in England would need to determine whether it might be possible and effective to obtain an anti-suit injunction to restrain the other party from conducting its proceeding in another jurisdiction.

This pack includes an updating supplement which complements the Main Work, The Anti-Suit Injunction, and brings it up to date in what is a fast-moving field. In particular it takes account of the volume of case law on the anti-suit injunction since the book was published, including most significantly the decision of the European Court of Justice in The Front Comor, the recent important House of Lords decision in Masri v Khoury, and other cases such as Wadi Sudr, CMA CGM v Hyundai, and Deutsche v Highland.