Democracy of Sound: Music Piracy and the Remaking of American Copyright in the Twentieth Century 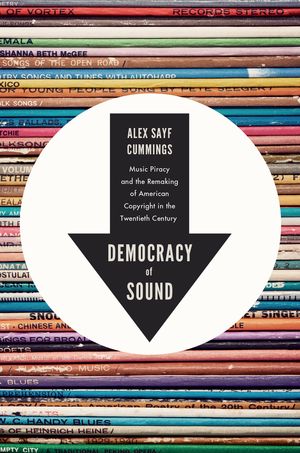 Democracy of Sound is the first book to examine music piracy in the United States from the dawn of sound recording to the rise of Napster and online file-sharing. It asks why Americans stopped thinking of copyright as a monopoly-a kind of necessary evil-and came to see intellectual property as sacrosanct and necessary for the prosperity of an "information economy." Recordings only became eligible for federal copyright in 1972, following years of struggle between pirates, musicians, songwriters, broadcasters, and record companies over the right to own sound. Beginning in the 1890s, the book follows the competing visions of Americans who proposed ways to keep obscure and noncommercial music in circulation, preserve out-of-print recordings from extinction, or simply make records more freely and cheaply available. Genteel jazz collectors swapped and copied rare records in the 1930s; radicals pitched piracy as a mortal threat to capitalism in the 1960s, while hip-hop DJs from the 1970s onwards reused and transformed sounds to create a freer and less regulated market for mixtapes. Each challenged the idea that sound could be owned by anyone. The conflict led to the contemporary stalemate between those who believe that "information wants to be free" and those who insist that economic prosperity depends on protecting intellectual property. The saga of piracy also shows how the dubbers, bootleggers, and tape traders forged new social networks that ultimately gave rise to the social media of the twenty first century. Democracy of Sound is a colorful story of people making law, resisting law, and imagining how law might shape the future of music, from the Victrola and pianola to iTunes and BitTorrent.

Contents:
INTRODUCTION
PART ONE: THE BIRTH AND GROWTH OF PIRACY, 1877-1955
CH.
1: MUSIC, MACHINES, AND MONOPOLY
CH.
2: COLLECTORS, CON MEN, AND THE STRUGGLE FOR PROPERTY RIGHTS
CH.
3: PIRACY AND THE RISE OF NEW MEDIA
PART TWO: THE LEGAL BACKLASH, 1945-1998
CH.
4: COUNTERCULTURE, POPULAR MUSIC, AND THE BOOTLEG BOOM
CH.
5: THE CRIMINALIZATION OF PIRACY
CH.
6: DEADHEADS, HIP HOP, AND THE POSSIBILITY OF COMPROMISE
CH.
7: THE GLOBAL WAR ON PIRACY
CONCLUSION: PIRACY AS SOCIAL MEDIA
NOTES
INDEX