The Oxford Handbook of Ethnicity, Crime, and Immigration 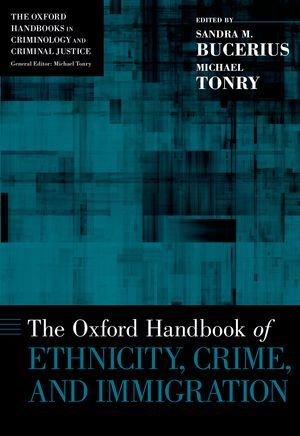 Social tensions between majority and minority populations often center on claims that minorities are largely responsible for crime and disorder. Members of some disadvantaged groups in all developed countries, sometimes long-standing residents and other times recent immigrants, experience unwarranted disparities in their dealings with the criminal justice system. Accusations of unfair treatment by police and courts are common.

The Oxford Handbook of Ethnicity, Crime, and Immigration provides comprehensive analyses of current knowledge about these and a host of related subjects. Topics include legal and illegal immigration, ethnic and race relations, and discrimination and exclusion, and their links to crime in the United States and elsewhere. Leading scholars from sociology, criminology, law, psychology, geography, and political science document and explore relations among race, ethnicity, immigration, and crime. Individual chapters provide in-depth critical overviews of key issues, controversies, and research. Contributors present the historical backdrops of their subjects, describe population characteristics, and summarize relevant data and research findings. Most articles provide synopses of racial, ethnic, immigration, and justice-related concerns and offer policy recommendations and proposals for future research. Some articles are case studies of particular problems in particular places, including juvenile incarceration, homicide, urban violence, social exclusion, and other issues disproportionately affecting disadvantaged minority groups.

The Oxford Handbook of Ethnicity, Crime, and Immigration is the first major effort to examine and synthesize knowledge concerning immigration and crime, ethnicity and crime, and race and crime in one volume, and does so both for the United States and for many other countries.