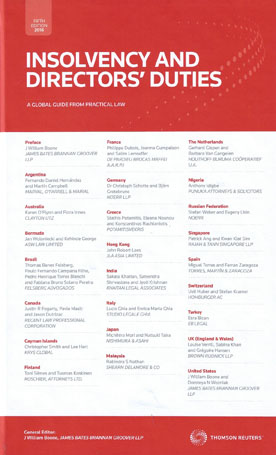 The 2008/2009 global financial crisis, which resulted in a number of international companies becoming financially distressed and seeking relief through insolvency filings, highlighted a number of deficiencies on both national and international levels in the differing manners in which countries address the multitude of cross-border issues arising in the administration of distressed global companies.

With commentary from leading lawyers addressing complex cross-border insolvency issues and rescue provisions, this fifth edition of the Insolvency and Directors' Duties Global Guide 2016 gives law firms and corporate counsel an insight into the key insolvency laws and issues across numerous jurisdictions.

It particularly focuses on recently enacted laws, initiatives or rulings in various countries that touch on the insolvency of corporate groups and the duties directors and officers owe to creditors and other entities in the "zone of insolvency".