The Regulation of Animal Health and Welfare: Science, Law and Policy 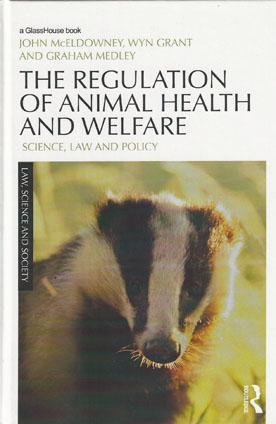 The Regulation of Animal Health and Welfare draws on the research of scientists, lawyers, economists and political scientists to address the current and future regulatory problems posed by the issues of animal health and disease.

Recent events such as the outbreak of mad cow disease, concerns about bluetongue in sheep, and the entry into the food chain of the offspring of cloned cattle, have heightened awareness of the issues of animal disease and welfare.

This book critically appraises the existing regulatory institutions and guiding principles of how best to maintain animal health in the context of social change and a developing global economy. Addressing considerations of sound science, the role of risk management, and the allocation of responsibilities, it also takes up the theoretical and practical challenges which here -- and elsewhere -- attend the co-operation of scientists, social scientists, lawyers and policy makers. Indeed, the collaboration of scientists and social scientists in determined and regulatory contexts such as that of animal disease is an issue of ever-increasing importance. And this book will be of considerable value to those with interests in this issue, as well as all those concerned with the law and policy relating to animal health and welfare

Law and the Management of Disasters: The Challenge of Resilence
Edited by: Alexia Herwig, Marta Simoncini
ISBN 9781138193529
Published December 2016
Routledge
£125.00