Microtrade: A New System of International Trade with Volunteerism Towards Poverty Elimination 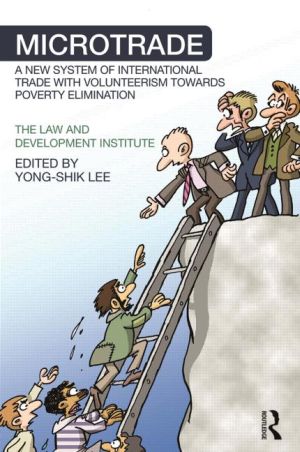 With contributions from well-regarded scholars of international economic law, this book sets out the case for an innovative solution to extreme poverty which utilizes international trade and its legal framework to relieve populations of the poorest countries around the world of extreme poverty. Microtrade is international trade on a small scale, based primarily on manually produced products using small amounts of capital and low levels of technology available at a local level in lesser developed countries.

This book explores the theory, application, and legal framework for microtrade. In the first part of the book the architect of the microtrade theory, Yong-Shik Lee, offers a theoretical framework for microtrade including its basic elements, product demand and operational issues, legal issues, and the global management and facilitation of microtrade. The book then goes on to look at issues including the structure and financing of microtrade, e-commerce, government procurement, and the fair trade movement's possible relationship with microtrade. . The final part of the book considers empirical case studies of microtrade with agricultural products. The book shows how microtrade, if effectively administered on a global scale, can do much to end extreme poverty.