The WTO and the Environment: Development of Competence Beyond Trade 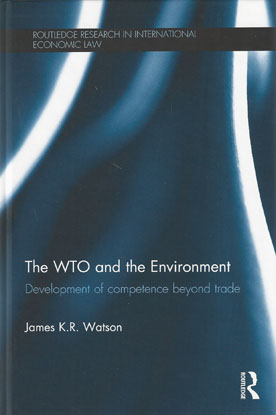 This book is a review of the development of the WTO dispute resolution procedure and the power and influence it has gained over the practises of the member countries as well as in other international treaties.

Mp> The book addresses the development of environmental competency in the WTO and examines the arguments of those who oppose WTO rule making with impacts on the environment. The WTO's interactions with multilateral environmental agreements are considered and recent WTO cases including the 2011 US/Mexico tuna dispute and the US sea turtles decision are analysed in detail.

In examining how an international organisation which was established with a specific purpose in mind has come to interact in fields beyond its original remit, James Watson demonstrates how the dispute resolution system at the WTO has come to work in a judicialised manner, operating with an informal system of precedent. This has led to the contracting parties placing more reliance on the decisions of the dispute panels and appeal body when considering policy options, with WTO rulings increasingly influencing the behaviour of national legislatures in regard to the environment.

The book goes on to make concrete recommendations, based on existing practise in the WTO dispute resolution procedure, which could enhance decision making in environmental cases heard by the WTO. The book argues that this could be achieved with straightforward amendments to the WTO, based on existing practices endorsed under the WTO for other policy considerations. The WTO and the Environment will be of particular interest to academics and students of International and Environmental law.