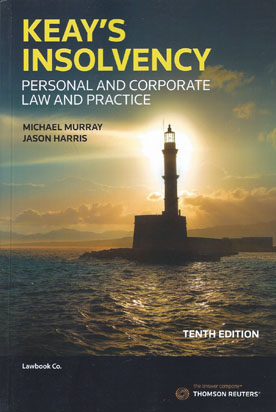 Keay’s Insolvency has become a recognised text on personal and corporate insolvency law and practice in Australia, and it is widely used by practitioners and regularly cited in court.

It offers both a detailed explanation of the law, supported by case law and commentary, and of insolvency practice, along with the authors’ critical analysis of the effectiveness and efficiency of the regime and views on its need for reform.

There has been considerable developments since the 9th edition with Insolvency Law Reform Act 2016 (Cth), (ILRA) which fully commenced on 1 September 2017 along with recent amendments made to the Corporations Act brought in by  the Treasury Laws Amendment (2017 Enterprise Incentives No. 2) Act 2017 (Cth), which introduces a new safe harbour for directors against insolvent trading for good faith restructuring efforts. This is aimed at assisting companies to restructure and avoid formal insolvency proceedings. The amendments also include protection against ipso facto clauses for creditors’ schemes, receivership and voluntary administration, which is aimed at facilitating restructuring using formal mechanisms.

The 10th edition will continue to report and explain the latest in case law development, throughout issues including bankruptcy and winding up processes, voidable transactions, schemes and administrations, and other core insolvency law.  There have been a number of significant cases at the appellate level since the 9th edition.