Law’s Abnegation: From Law’s Empire to the Administrative State 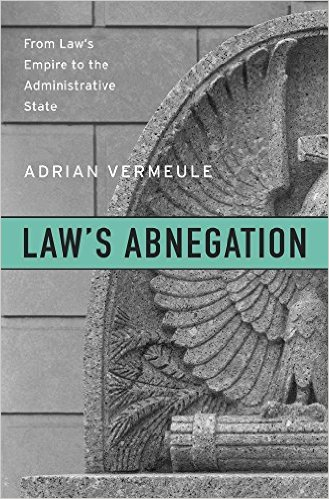 Ronald Dworkin once imagined law as an empire and judges as its princes. But over time, the arc of law has bent steadily toward deference to the administrative state. Adrian Vermeule argues that law has freely abandoned its imperial pretensions, and has done so for internal legal reasons.

In area after area, judges and lawyers, working out the logical implications of legal principles, have come to believe that administrators should be granted broad leeway to set policy, determine facts, interpret ambiguous statutes, and even define the boundaries of their own jurisdiction.

Agencies have greater democratic legitimacy and technical competence to confront many issues than lawyers and judges do. And as the questions confronting the state involving climate change, terrorism, and biotechnology (to name a few) have become ever more complex, legal logic increasingly indicates that abnegation is the wisest course of action.

As Law’s Abnegation makes clear, the state did not shove law out of the way. The judiciary voluntarily relegated itself to the margins of power. The last and greatest triumph of legalism was to depose itself. Related Links