The Law of the Manor 2nd ed 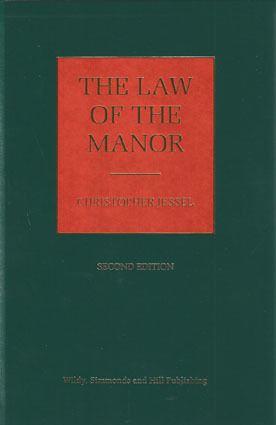 Wildy's Book of the Month: December 2012

The Law of the Manor is the definitive work on the subject, providing detailed, up-to-date and comprehensive coverage for lawyers and also to those owning, managing, selling or buying historic houses and estates. It provides a modern description of the law associated with lordships of the manor.

Principally concerned with the lands and rights of the lord, the book also considers rights that tenants of the manor can claim against him. These are put in context with a discussion of associated topics such as franchises and titles of nobility.

The second edition has been updated to cover numerous developments in the law since 1998, in particular the Land Registration Act 2002, with full discussion of the way manorial rights, including minerals, will cease to be overriding interests after 12 October 2013. The book includes changes made by the Countryside and Rights of Way Act 2000, the Commons Act 2006, the Hunting Act 2004, the House of Lords Act 1999, and the Legal Services Act 2007 as well as the relevant case law.

New material has been included on escheat, rectorial manors and roadside verges. There is also greater coverage of legal authorities including over 50 decisions since the first edition and a selection of useful precedents for the practitioner. Although the book is about the law of the manor in England and Wales, there is some reference to other jurisdictions, most notably the experimental extension of the manorial system to some American colonies.

The text is arranged in five parts. Part 1 describes the context, summarises the history and analyses custom which is the basis of manorial law. Part 2 describes the lands of tenants and lords and the relations between them. Part 3 discusses rights and comprises a detailed commentary on section 62(3) of the Law of Property Act 1925.

It covers rights of common, mineral and sporting rights, courts and remaining revenues. Part 4 sets the manor in the context of other institutions, namely the village, the church, towns and feudal relationships. Part 5 summarises and looks at the modern manor, its documents, conveyancing (with particular reference to registered land) and taxation, concluding with suggestions for reform.

The Law of the Manor is for property lawyers, owners, managers, buyers and sellers of historic houses and estates and surveyors concerned with rural matters.