Court & Bowled: Tales of Cricket and the Law 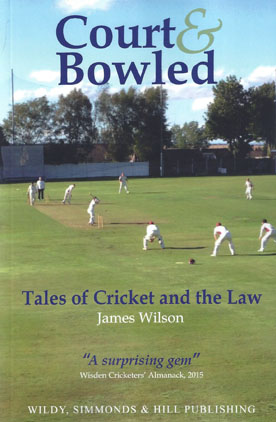 'In summertime village cricket is the delight of everyone' the English judge Lord Denning famously wrote, in a case brought by someone who clearly disagreed with him.

The case was but one example of how the game of cricket cannot always avoid the law. Neighbours or passers-by get hit by stray cricket balls, protesters interrupt matches, players get into fights or take drugs, and not a few involved with the game sue each other for libel.

This book looks at a number of stories where cricket or cricketers gave rise to a legal dispute. It begins with a short history of cricket as it appears in the early law reports, including the case from 1598 which contains the very first known use of the word “cricket”. It then turns to individual cases from Victorian times to the present day.

Some of the disputes have been of fundamental importance to the game itself. The ruling in Bolton v Stone affected village and indeed impromptu cricketers everywhere, while if Kerry Packer had lost his High Court action in 1978, his cricket revolution would have been over before a ball had been bowled.

Other cases raise issues going well beyond the boundary ropes: Basil D’Oliveira’s omission by England from a tour of South Africa, for example, ended up being considered in the highest echelons of power in both countries.

All of the stories demonstrate something common to both cricket matches and court cases: behind the intrigue, entertainment and amusement of both there are real people and real human stories, with all the usual human emotions and fallibility. The book is written in a clear, accessible style, free of legal technicalities.

New for this edition:- It has been updated to include the tragic death of Phillip Hughes, the perjury trial of Chris Cairns and the ball-tampering incident involving Faf du Plessis The book will be of interest not only to cricket fans or lawyers but anyone interested in tales of high (and low) human drama and great ethical, moral and legal dilemmas.

Praise for the hardback edition of James Wilson’s Court & Bowled:

“A surprising gem … all in all, a thoroughly enlightening piece of work” Wisden Cricketer’s Almanack, 2015 edition

“A thoughtful and well-written book … Most intriguing is the meticulous analysis of incidents where cricket assumed an importance far beyond a beloved game … The writer addresses all these with judicial impartiality, carefully maintaining a distinction between his narrative account of facts and personal and acute observations” Lord Judge, former Lord Chief Justice, The Times

'...contains a wealth of fascinating material. It is a must read for anyone who has an interest in these pursuits. The best of the book is to be found in his analytical treatment of some of the shared concepts of cricket and the law. The chapters on "The Law of the Game: the Spirit and Letter" and "The Umpire is Always Right" are outstanding' New Law Journal

Contents:
Acknowledgements
Introduction
The Beginnings
The Victorians
The Demon Drink
The Drugs
The Deaths
The Money
The Despots
The Revolutionary: Mr Packer Goes to the High Court
The Libels Part I: The Players
The Libels Part II: The Ball-Tampering Controversies
Ball-Tampering and Law 42
The Libels Part III: The Trials of Lalit Modi
The Fixers
The Nationals
The Neighbours
Crime on the Field
The Laws of the Game: The Spirit and the Letter
The Umpire is Always Right
Recent Developments
Drawing Stumps
Index;