Continuous Sedation at the End of Life: Ethical, Clinical and Legal Perspectives 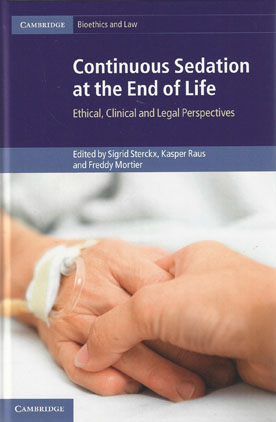 Continuous sedation until death (sometimes referred to as terminal sedation or palliative sedation) is an increasingly common practice in end-of-life care.

However, it raises numerous medical, ethical, emotional and legal concerns, such as the reducing or removing of consciousness (and thus potentially causing 'subjective death'), the withholding of artificial nutrition and hydration, the proportionality of the sedation to the symptoms, its adequacy in actually relieving symptoms rather than simply giving onlookers the impression that the patient is undergoing a painless 'natural' death, and the perception that it may be functionally equivalent to euthanasia.

This book brings together contributions from clinicians, ethicists, lawyers and social scientists, and discusses guidelines as well as clinical, emotional and legal aspects of the practice. The chapters shine a critical spotlight on areas of concern and on the validity of the justifications given for the practice, including in particular the doctrine of double effect.

Contents:
1. Introduction Sigrid Sterckx, Kasper Raus and Freddy Mortier
2. Continuous sedation until death: state of the art Sophie Bruinsma, Judith Rietjens and Agnes van der Heide
3. Death by equivocation: a manifold definition of terminal sedation David Albert Jones
4. Palliative sedation: clinical, pharmacological and practical aspects Josep Porta-Sales
5. Clinical aspects of palliative sedation Nigel Sykes
6. Understanding the role of nurses in the management of symptoms and distress in the last days of life Eleanor Wilson and Jane Seymour
7. Principle and practice for palliative sedation: gaps between the two David Orentlicher
8. The legal permissibility of continuous deep sedation at the end of life: a comparison of laws and a proposal Evelien Delbeke
9. The Dutch national guideline on palliative sedation Johan Legemaate
10. Continuous deep sedation at the end of life: balancing benefits and harms in England, Germany and France Richard Huxtable and Ruth Horn
11. Can the doctrine of double effect justify continuous deep sedation at the end of life? Kasper Raus, Sigrid Sterckx and Freddy Mortier
12. Palliative sedation, consciousness and personhood Timothy Holahan, Thomas Carroll, Claudia Gonzalez and Timothy Quill
13. The ethical evaluation of continuous sedation at the end of life Johannes van Delden
14. Terminal sedation and euthanasia - the virtue in calling a spade what it is Soren Holm
15. Terminal sedation: recasting a metaphor as the ars moriendi changes Margaret Battin.