Law and Memory: Towards Legal Governance of History 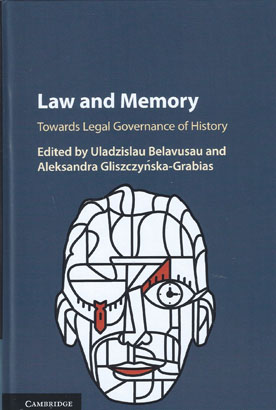 Legal governance of memory has played a central role in establishing hegemony of monumental history, and has forged national identities and integration processes in Europe and beyond.

In this book, a range of contributors explore both the nature and role of legal engagement into historical memory in specific jurisdictions and cases. They also reflect on potential conflicts between legal governance, political pluralism, and fundamental rights, such as freedom of expression.

In recent years, there have been numerous monumental commemoration practices and memory-laws about correlated events all over the world, and this is a prime opportunity to undertake an important global comparative scrutiny of memory laws.

Against the background of mass re-writing of history in different parts of the world, this book revisits a fascinating subject of memory laws from the standpoint of comparative law and transitional justice.

Contents:
Acknowledgements
Contributors
Introduction: Memory Laws: Mapping a New Subject in Comparative Law and Transitional Justice Uladzislau Belavusau & Aleksandra Gliszcynska-Grabias
Part I. International Law:
1. The U.N. Human Rights Committee's View of the Past Antoon De Baets 2. The Role of International Criminal Tribunals in Shaping the Historical Accounts of Genocides Marina Aksenova
3. The “Right to Truth” in International Law: the “Last Utopia”? Patricia Naftali
Part II. European Law (Council of Europe and European Union)
1. Kononov v. Latvia as the Ontological Security Struggle over Remembering the Second World War Maria Malksoo
2. Testing the 'Uniqueness': Denial of the Holocaust vs Denial of Other Crimes before the European Court of Human Rights Paolo Lobba
3. Legislating History: The European Union and the Denial of International Crimes Luigi Cajani
Part III: National Perspectives within European Union
1. Challenging Historical Facts and National Truths: An Analysis of Cases from France and Greece Ioanna Tourkochoriti
2. Legal Silences and The Memory of Francoism in Spain Alfons Aragoneses
3. Politics of Public Knowledge in Dealing with the Past: Postcommunist Experiences and Some Lessons from the Czech Republic Jiří Priban
4. Adjudication in Deportation Cases of Latvia and International Law Ieva Miluna
5. Judging the Conducător: Fascism, Communism & Legal Discontinuity in Post- War Romania Cosmin Sebastian Cercel
6. Dealing with the Past in and around the Fundamental Law in Hungary Miklós Konczol
7. On the Politics of Resentment, Mis-memory and Constitutional Fidelity. The Demise of the Polish Overlapping Consensus? Tomasz Tadeusz Koncewicz
Part IV: Perspectives beyond European Union
1. Defending Stalinism by Means of Criminal Law: Russia, 1995–2014 Nikolay Koposov
2. Cutting the Umbilical Cord: The Narrative of the National Past and Future in Ukrainian De-communization Policy Lina Klymenko
3. Banning Genocide Denial – Should Geography Matter? Robert A. Kahn
4. 'From Banning Nakba to Bridging Narratives': The Collective Memory of 1948 and Transitional Justice for Israelis and Palestinians Jeremie Bracka
5. Historical Revisionism and the Settler State: The Canadian Experience Michael Morden
6. Defense of Democracy and the Preservation of Collective Memory through Criminal Legislation: The Challenges of Reconciliation in Peru Salvador Herencia Carrasco
Epilogue: Beyond “Memory Laws”: Towards a General Theory of Law & Historical Discourse Eric Heinze
Index.