A Debt Against the Living: An Introduction to Originalism 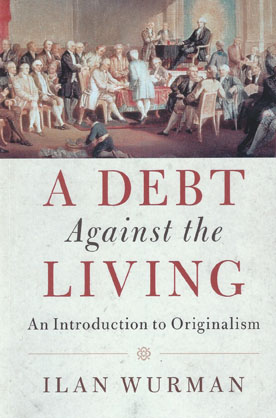 Thomas Jefferson famously wrote that the earth belongs to the living. His letter to James Madison is often quoted for the proposition that we should not be bound to the 'dead hand of the past', suggesting that the Constitution should instead be interpreted as a living, breathing document.

Less well-known is Madison's response, in which he said the improvements made by the dead - including the US Constitution - form a debt against the living, who benefit from them.

In this illuminating book, Ilan Wurman introduces Madison's concept of originalism to a new generation and shows how it has shaped the US Supreme Court in ways that are expected to continue following the death of Justice Antonin Scalia, one of the theory's leading proponents.

It should be read by anyone seeking a better understanding of originalism and its ongoing influence on the constitutional jurisprudence of the Supreme Court.

Contents:
Forward
Acknowledgments
Introduction
Part I. Preliminaries and Language:
1. The origins of originalism
2. The meaning of meaning
Part II. The Original Constitution:
3. Constitutional legitimacy
4. The founders on founding
5. Interpreting the constitution
Part III. Objections and Recapitulation:
6. Lawyers as historians
7. Brown v. board and originalism
8. A coda on nonoriginalisms
Epilogue.