Gender in Refugee Law: From the Margins to the Centre 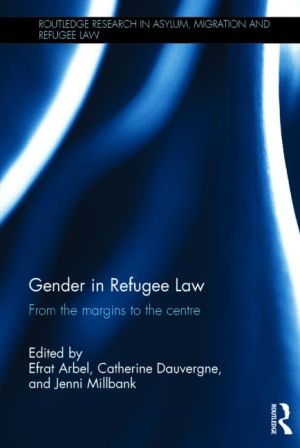 The issue of gender has had a large influence on the development of international refugee law over the last few decades, most notably with the Gender Guidelines issued in 2002 by the United Nations High Commission for Refugees. This volume assesses the progress toward equality for women in refugee law. It documents the advances that have been made following intense advocacy around the world in the 1990s, and considers to what extent gender has been successfully integrated into refugee law despite its formal exclusion. Evaluating the research and advocacy agendas for gender in refugee law ten years beyond the UNHCR Gender Guidelines, it investigates what happens to women and sexual minorities in the refugee law dilemmas of security, criminalization, harmonized protections, and regional solutions. The book looks to establish what has been accomplished and what remains to be done asking whether we have arrived at a substantive and nuanced understanding of gender related persecution in refugee law? The first part of the book is comprised of chapters addressing broad conceptual and doctrinal themes that arise at the intersection of gender and refugee law: how credibility is determined, how refugee jurisprudence requires and creates 'victimization', how the central doctrines of 'particular social group' and 'state protection' meet the challenge of gender in the refugee process, how women's claims are affected by securitization and by armed conflict, two areas that are traditionally and stereotypically masculinized. The second part of the book investigates these concepts and doctrines through specific case studies across major Western refugee receiving nations. These case studies develop stories of legal transformation and social change. They illuminate how gender has transformed refugee law through specific advocacy initiatives and strategies across several jurisdictions. The volume includes contributions from scholars and members of the advocacy community allowing for analysis of key conceptual and doctrinal developments with a reflection on how these concepts and doctrines are applied in practice.

Asylum-Seeker and Refugee Protection in Sub-Saharan Africa: The Peregrination of a Persecuted Human Being in Search of a Safe Haven
Cristiano d'Orsi
ISBN 9781138094253
Published April 2017
Routledge
£42.99

Asylum Law in the European Union: From the Geneva Convention to the Law of the EU
Francesco Cherubini
ISBN 9781138242753
Published November 2016
Routledge
£44.99

Asylum-Seeker and Refugee Protection in Sub-Saharan Africa: The Peregrination of a Persecuted Human Being in Search of a Safe Haven (eBook)
Cristiano d'Orsi
ISBN 9781317669814
Published August 2015
Routledge
£38.69

Asylum-Seeker and Refugee Protection in Sub-Saharan Africa: The Peregrination of a Persecuted Human Being in Search of a Safe Haven
Cristiano d'Orsi
ISBN 9781138025424
Published August 2015
Routledge
£125.00