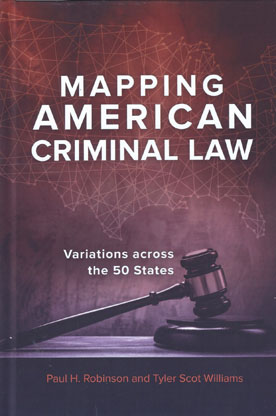 This first-of-its-kind volume sketches the diversity implicit in United States criminal law doctrine through its examination of a range of criminal laws pertaining to murder, sexual assault, drug offenses, the insanity defense, and more and the way in which different states deal with those issues.

In addition to providing insights into the most widely invoked standards in criminal law, the book raises awareness of the enormous discrepancies among the criminal laws of the US states, documenting them using dozens of visually coded maps that showcase geographic, political, and socioeconomic differences to explain patterns of agreement and disagreement.

Mapping American Criminal Law: Variations Across the 50 States is for political scientists, criminologists, sociologists, legal scholars, policy advisors, legislators, lawyers, judges, and scholars and students of these fields. In addition, each chapter is highly accessible to laypersons and includes an explanation of the subject matter as well as explanations of the various approaches to criminal law taken by states.

Paul H. Robinson is the Colin S. Diver Professor of Law at the University of Pennsylvania Law School and one of the world's leading criminal law scholars. A prolific writer and lecturer, Robinson served as counsel for the US Senate Subcommittee on Criminal Laws and Procedures and was the lone dissenter when the US Sentencing Commission promulgated the current federal sentencing guidelines. Robinson has directed a dozen criminal code reform projects in the United States and abroad, including the first modern Islamic penal code, and is currently commissioned to draft criminal codes for Delaware and Somalia.

Tyler Scot Williams is an associate at a large law firm in Washington D.C. He holds five academic degrees, including a juris doctor from the University of Pennsylvania Law School and masters degrees in philosophy, medical ethics, and theology.