A Study of Mixed Legal Systems: Endangered, Entrenched or Blended 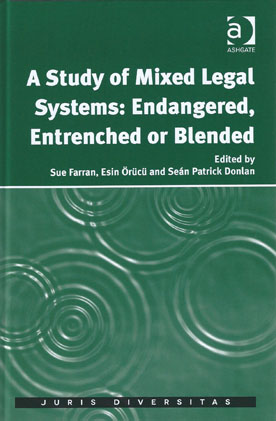 This book provides a fascinating and critical insight into familiar and less familiar mixed legal systems, taking the reader on a voyage of discovery from the islands of St Lucia and Guyana to those of Seychelles and Mauritius.

It considers those mixed systems which share boundaries with unmixed ones, such as Scotland and Quebec, and those located off-shore of major and dominant jurisdictions such as Jersey off the coasts of France’s civil law and England’s common law system, as well as Cyprus, situated between the influences of Europe and those of the Middle East.

The legal systems represented here have two things in common: they are mixed, although in different ways, and they may be in real or potential danger of losing their unique mixed legal status. It is this endangered status that brings together these leading contributors from across the globe to identify the constituent elements which make up their particular forms of mixed jurisdictions, and to reflect on where their vulnerabilities and strengths are to be found and why they may be at risk.

Through a forensic examination of the strengths and weaknesses of their own jurisdictions the authors are able to inform possible strategies for safeguarding mixed jurisdictions and identifying those that seem doomed to extinction.