Parliament and the Law 2nd ed 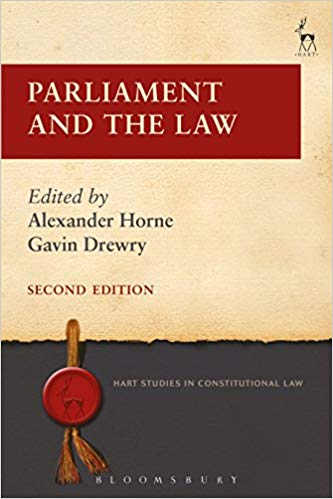 This new edition of Parliament and the Law is an edited collection of essays, supported by the UK's Study of Parliament Group, including contributions by leading constitutional lawyers, political scientists and parliamentary officials.

It provides a wide-ranging overview of the ways in which the law applies to, and impacts upon, the UK Parliament, and it considers how recent changes to the UK's constitutional arrangements have affected Parliament as an institution.

It includes authoritative discussion of a number of issues of topical concern, such as: the operation of parliamentary privilege, the powers of Parliament's select committees, parliamentary scrutiny, devolution, English Votes for English Laws, Members' conduct and the governance of both Houses. It also contains chapters on financial scrutiny, parliamentary sovereignty, Parliament and human rights, and the administration of justice.

Aimed mainly at legal academics, practitioners, and political scientists, it will also be of interest to anyone who is curious about the many fascinating ways in which the law interacts with and influences the work, the constitutional status and the procedural arrangements of the Westminster Parliament.

Essays on the History of Parliamentary Procedure: In Honour of Thomas Erskine May
Edited by: Paul Evans
ISBN 9781509937523
Published April 2020
Hart Publishing
£40.00

Essays on the History of Parliamentary Procedure: In Honour of Thomas Erskine May
Edited by: Paul Evans
ISBN 9781509900206
Published December 2017
Hart Publishing
£90.00

Essays on the History of Parliamentary Procedure: In Honour of Thomas Erskine May (eBook)
Edited by: Paul Evans
ISBN 9781509900213
Published December 2017
Hart Publishing
£36.00