Essays on the History of Parliamentary Procedure: In Honour of Thomas Erskine May 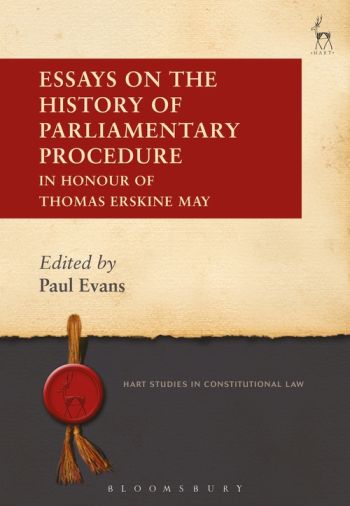 The 8th February 2015 marked the 200th anniversary of the birth of Thomas Erskine May. May is the most famous of the fifty holders of the office of Clerk of the House of Commons. His continued renown arises from his Treatise upon the Law, Privileges, Proceedings and Usage of Parliament, first published in 1844 and with its 25th edition currently in preparation. It is known throughout those parts of the world that model their constitutional arrangements on Westminster as the 'Bible of Parliamentary Procedure'.

This volume celebrates both the man and his book. Bringing together current and former Clerks in the House of Commons and outside experts, the contributors analyse May's profound contribution to the shaping of the modern House of Commons, as it made the transition from the pre-Reform Act House to the modern core of the UK's constitutional democracy in his lifetime. This is perhaps best symbolised by its enforced transition between 1834 and 1851 from a mediaeval slum to the World Heritage Palace of Westminster, which is the most iconic building in the UK.

The book also considers the wider context of parliamentary law and procedure, both before and after May's time. It constitutes the first sustained analysis of the development of parliamentary procedure in over half a century, attempting to situate the reforms in the way the central institution of our democracy conducts itself in the political contexts which drove those changes.

Contents:
Introduction: The Growth of Many Centuries - Paul Evans
Part I: The Man and his Milieu
1. A Sycophant of Real Ability: The Career of Thomas Erskine May - William McKay
2. Slumber and Success: The House of Commons Library after May - Oonagh Gay
3. Magi or Mandarins?: Contemporary Clerkly Culture - Emma Crewe
Part II: The Book
4. Persuading the House: The Use of the Commons Journals as a Source of Precedent - Martyn Atkins
5. Manuals before May: From the Fourteenth to the Seventeenth Century - David Natzler
6. Parliamentary Law in the Eighteenth Century: From Commonplace to Treatise - Paul Seaward
7. From Manual to Authority: The Life and Times of the Treatise - Paul Evans and Andrej Ninkovic
8. Controversy at the Antipodes (and Elsewhere): The International Cousins of the Treatise - David Natzler, David Bagnall, Jean-Phillipe Brochu and Peter Fowler
Part III: Procedural Development
9. The Principle of Progress: May and Procedural Reform - William McKay
10. May on Money: Supply Proceedings and the Functions of a Legislature - Colin Lee
11. A History of the Standing Orders - Simon Patrick
12. Pursuing the Efficient Despatch of Business: The Role of Committees in Procedural Reform since 1900 - Mark Egan
13. Finding Time: Legislative Procedure since May - Jacqy Sharpe and Paul Evans
Part IV: Select Committees
14. Where Did It All Go Right: Developments in Select Committees, 1913–1960 - Mark Hutton
15. A Road not Taken: Select Committees and the Estimates, 1880–1904 - Colin Lee
Part V: The Lex Parliamentaria Revisited
16. Privilege: The Unfolding Debate with the Courts - Eve Samson
17. Is the Lex Parliamentaria Really Law?: The House of Commons as a Legal System - David Howarth