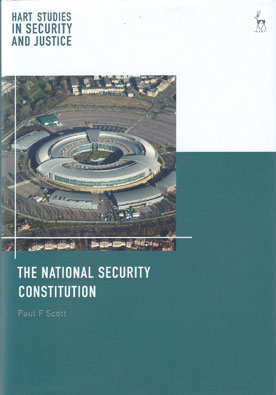 This book addresses the various ways in which modern approaches to the protection of national security have impacted upon the constitutional order of the United Kingdom.

It outlines and assess the constitutional significance of the three primary elements of the United Kingdom's response to the possibility of terrorism and other phenomena which threaten the security of the state: the body of counter-terrorism legislation which has grown up in the last decade and a half, the evolution of the law of investigatory powers, and (to the extent relevant to the domestic constitution) the law governing international military action and co-operation.

On the basis of this, it demonstrates that national security as a good to be protected and promoted in contemporary Britain is reflected not merely in the emergence of a discrete body of law by which it is protected at home and abroad, but that the concern with national security has leaked into other areas of public law - areas which are not directly linked to terrorism and legal response to it, but which become (whether by accident or design) implicated in these endeavours, with significant and potentially grave consequences for the constitutional order generally.

The Constitutional Structure of Europe's Area of 'Freedom, Security and Justice' and the Right to Justification
Ester Herlin-Karnell
ISBN 9781509945733
Published November 2020
Hart Publishing
£36.99

Permanent States of Emergency and the Rule of Law: Constitutions in an Age of Crisis
Alan Greene
ISBN 9781509940257
Published September 2020
Hart Publishing
£36.99

The Constitutional Structure of Europe's Area of `Freedom, Security and Justice' and the Right to Justification
Ester Herlin-Karnell
ISBN 9781509912490
Published April 2019
Hart Publishing
£75.00