The Court of Justice of the European Union: Multidisciplinary Perspectives 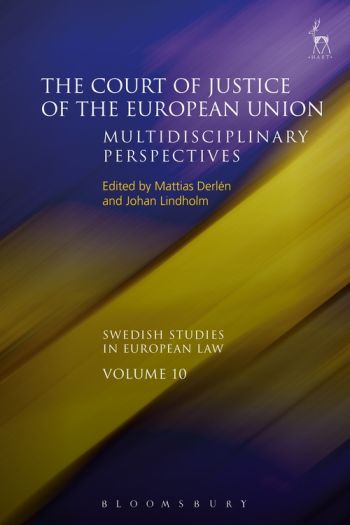 In 2017, the Court of Justice of the European Union (CJEU) celebrated 65 years and has thereby achieved retirement age in most EU Member States. If it were to retire, the Court would be able to look back at a fascinating journey, from its relatively humble beginning on 4 December 1952 as part of the then brand-new European Coal and Steel Community, to one of the most important and exciting judicial institutions in Europe, perhaps in the entire world.

The need to understand the CJEU has never been greater. This volume is dedicated to improving our understanding of the Court in relationship to other actors, including other EU institutions, the Member States, national courts, third countries, and international organisations. It is based on a conference arranged by the Swedish Network for European Legal Studies (SNELS) held at Stockholm University in December 2016, and includes contributions by both lawyers and researchers in other fields, as well as current members of the Court.

Contents:
1. The Court of Justice Then, Now and Tomorrow
Anthony Arnull
2. Preliminary Rulings to the CJEU and the Swedish Judiciary: Current Developments
Ulf Bernitz
3. A Dynamic Analysis of Judicial Behaviour: The Auto-Correct Function of Constitutional Pluralism
Ana Bobic
4. Pre-Ratification Judicial Review of International Agreements to be Concluded by the European Union
Graham Butler
5. Serving Two Masters: CJEU Case Law in Swedish First Instance Courts and National Courts of Precedent as Gatekeepers
Mattias Derlén and Johan Lindholm
6. The Role of the Court in Limiting National Policy-Making: Requiring Safeguards against the Arbitrary Use of Discretion
Angelica Ericsson
7. Institutional Balance as Constitutional Dialogue: A Republican Paradigm for the EU
Desmond Johnson
8. House of Cards in Luxemburg?: A Brief Defence of the Strategic Model of Judicial Politics in the Context
of the European Union
Olof Larsson and Daniel Naurin
9. Referring Court Influence in the Preliminary Ruling Procedure: The Swedish Example
Anna Wallerman
10. Citizen Control through Judicial Review
Anna Wetter Ryde
11. The Scandinavians: The Foot-dragging supporters of European Law?
Marlene Wind
12. On Specialisation of Chambers at the General Court
Ulf Öberg, Mohamed Ali and Pauline Sabouret

National Developments in the Intersection of IPR and Competition Law: From Maglite to Pirate Bay
Edited by: Thomas Bull
ISBN 9781841139449
Published May 2011
Hart Publishing
£93.00