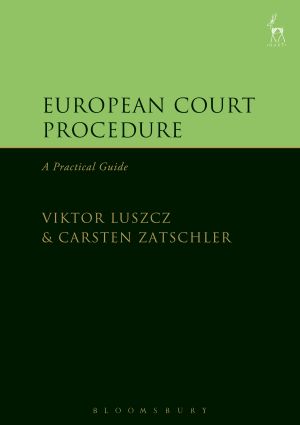 The enforcement of rights and obligations derived from EU law usually begins before national courts or the European Commission, but will sooner or later bring any practitioner in contact with the European Courts based in Luxembourg: the Court of Justice and the General Court of the European Union. Litigation in these two fora is on its surface similar to that in front of national courts but harbours many pitfalls which can trip up even experienced practitioners.

Based on the newly reformed rules of procedure, in force as of January 2012, and written by court insiders, this book gives a detailed but practice-oriented overview of the legal framework and working practices of the European Courts. It aims to give both lawyers appearing for the first time in Luxembourg and those with ample experience of advising on and litigating in EU law a comprehensive reference tool and a guide as to how to present cases most effectively. It covers the whole of the preliminary reference procedure, starting from how to obtain a reference to the Court of Justice in a national court, as well as dealing in detail with all aspects of direct actions against EU institutions brought in the General Court. Aimed primarily at practising lawyers, the work also offers valuable guidance to national judges dealing with cases raising points of EU law and provides insights into the reasoning process of the European Court of interest to scholars in the field.