This book is now Out of Print.
A new edition has been published, the details can be seen here:
International Commercial Disputes: Commercial Conflict of Laws in English Courts 4th ed isbn 9781841138510 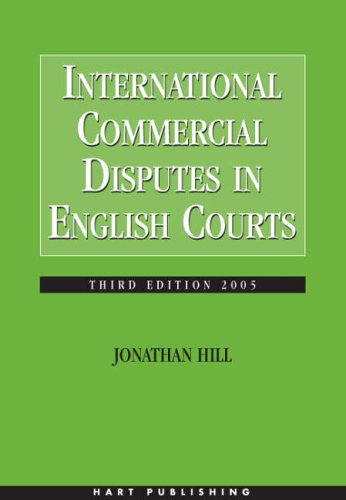 
This is the third edition of a book formerly published by Lloyds of London Press under the title International Commercial Disputes. It is concerned with how commercial disputes which have connections with more than one country are dealt with by the English courts.

Much of the law which provides the framework for the resolution of such disputes is derived from international instruments, as a consequence of which English law is very similar to or the same as the law of other countries in Europe and beyond.

The work comprises three parts. The first part considers the jurisdiction of the English courts and the recognition and enforcement in England of judgments granted by the courts of other countries. This part of the work, which involves analysis of both the Brussels regime (comprising the Brussels I Regulation, the Brussels Convention and the Lugano Convention) and the so-called traditional rules, includes chapters dealing with jurisdiction in personam and in rem, antisuit injunctions and provisional measures.

The works second part focuses on the rules which determine whether English law or the law of another country is applicable to a given situation. The part includes a discussion of choice of law in contract and tort, foreign currency obligations and proof of foreign law.