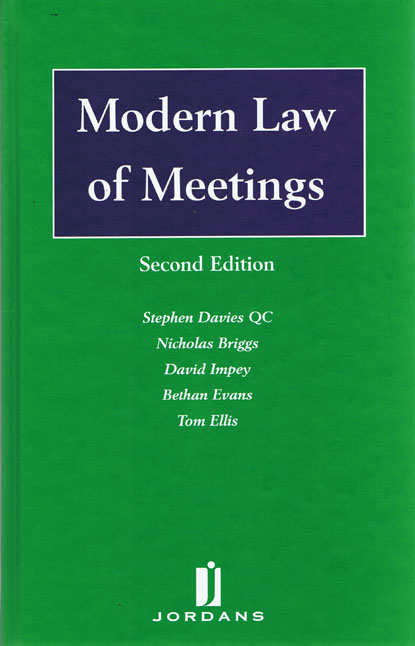 
Modern Law of Meetings comprehensively deals with the law and practice of company, insolvency, local authority and public meetings, as well as meetings to conduct business generally. It provides a thorough analysis of the meeting process, from deciding when a meeting is needed, the convening of a meeting, its conduct and management and the keeping of lawful and adequate records. It deals with related topics such as defamatory statements, breach of the peace at public meetings and the various means of challenging decisions taken at meetings.

This new edition has been thoroughly updated to cover the law relating to shareholder meetings and resolutions which has been substantially changed by the Companies Act 2006. The changes and procedural issues that all companies need to get to grips with include:

The chapters on local authority meetings have been significantly revised to take account of the provisions of the Local Government and Public Involvement in Health Act 2007, which made a range of changes to decision making in local authorities. It also covers the new code of conduct for local authority councillors on when they need to declare interests and withdraw from meetings and when they can address the meeting.