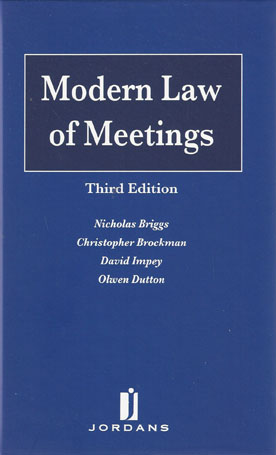 Modern Law of Meetings comprehensively deals with the law and practice of company, insolvency and local authority meetings, as well as meetings to conduct business generally. It provides a thorough analysis of the meeting process, from deciding when a meeting is needed, the convening of a meeting, its conduct and management and the keeping of lawful and adequate records.

It is designed to help company officers and their advisers navigate all of the rules and regulations governing board and general meetings set out in the Companies Act 2006 and the model form articles for private companies limited by shares, guarantee companies and public companies respectively, all of which came fully into force on 1 October 2009.

It deals in detail with the saving provisions that apply to companies whose constitutions pre-date the relevant parts of the 2006 Act, which often have an option of either preserving their old way of doing things, or converting to the 2006 Act regime.

The book covers the legal and practical consequences for companies dealing with issues such as:

The new edition also covers the often significant changes made to the original provisions of the 2006 Act by, for example, regulations such as the Companies (Shareholders Rights) Regulations 2009, SI 2009/1632 which, among other reforms, alter the rules governing proxies and corporate representatives, and members’ powers to require a general meeting to be called.