This book is now Out of Print.
A new edition has been published, the details can be seen here:
British Overseas Territories Law 2nd ed isbn 9781509918706 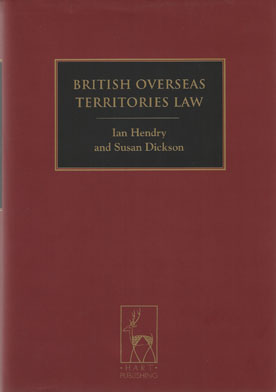 Most if not all of these territories are likely to remain British outposts, and many have new constitutional arrangements. This book provides a comprehensive and up-to-date description of the constitutional and international status of the territories, and of the main elements of their modern governance in law and practice.

It describes their constitutional position and relationship with the United Kingdom, and goes on to deal with legislative, executive and judicial authority and controls, the sources of law, and human rights protection in the territories.

It analyses defence, security and emergency powers in the territories; the nationality and status of people 'belonging' to them; their public finance arrangements; their relationship with the European Union; and the conduct of their external relations. It examines the status of the territories in international law, their relationship with the United Kingdom in that context and the United Kingdom's international responsibility for them.

It concludes with a description of the means of terminating British sovereignty. An Annex sets out key features of each territory in turn, describing briefly its history, status, constitutional structure, courts, sources of law and economy.