Territorial Pluralism in Europe: Vertical Separation of Powers in the EU and its Member States 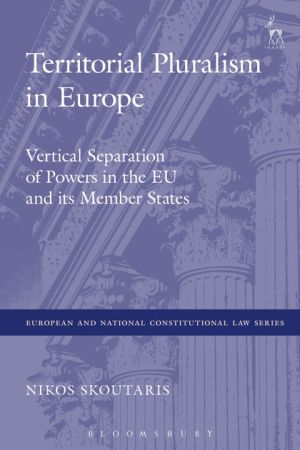 Governmental powers can be apportioned vertically at different levels. Five levels of vertical government are distinguishable, ranging from the essentially local to the truly global. The first is local, ie municipal or citywide, the second substate-regional, the third the State, the fourth supranational, eg the European Union and the fifth global, for instance the WTO and the UN. This book focuses on the second, third and fourth levels, analysing the interaction of the constitutional and political orders of EU Member States that exhibit varying degrees of territorial pluralism, their sub-state entities and the supranational organisation to which they belong. It does so by comparing the division of competences for internal policies but also for external affairs, the various models of fiscal federalism and the different systems for the effective protection of individual and collective rights within various European multi-level constitutional orders. Using a functional method of comparative constitutional law research, the book provides a timely and thought-provoking perspective on the application of the federal principle within the European constitutional space.