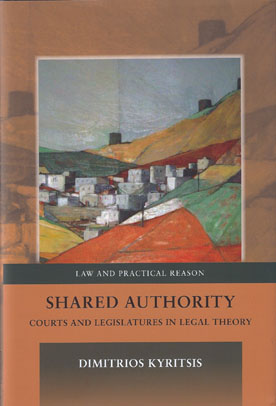 This conception has eclectic affinities with legal positivism, and although it may have been a helpful intellectual tool in the past, it now increasingly generates more problems than it solves. For this reason, the author argues, legal philosophers are better off abandoning it. At the same time they are asked to dismantle the philosophical and doctrinal infrastructure that has been based on it and which has been hitherto largely unquestioned. In its place the book offers an alternative framework for understanding the role of courts and the legislature; a framework which is distinctly anti-positivist and which builds on Ronald Dworkin's interpretive theory of law.

But, contrary to Dworkin, it insists that legal duty is sensitive to the position one occupies in the project of governing; legal interpretation is not the solitary task of one super-judge, but a collaborative task structured by principles of institutional morality such as separation of powers. Moreover in this collaborative task, different participants have a moral duty to respect each other's contributions.

Contents:
1. In Praise of Particular Jurisprudence
2. The Persistent Significance of Jurisdiction
3. Dimensions of Interpretation
4. Legality, Integrity and Institutional Design
5. Institutions and Citizens
6. Broadening the Canvas