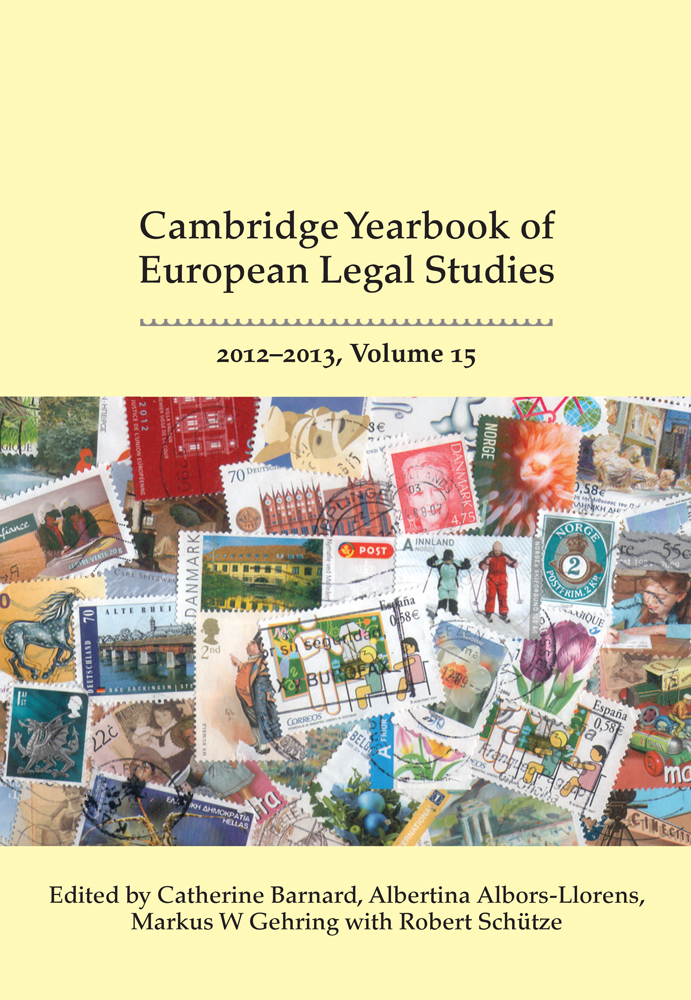 
The Cambridge Yearbook of European Legal Studies provides a forum for the scrutiny of significant issues in EU Law, the law of the European Convention on Human Rights, and Comparative Law with a 'European' dimension, and particularly those issues which have come to the fore during the year preceding publication.

The contributions appearing in the collection are commissioned by the Centre for European Legal Studies (CELS) Cambridge, a research centre in the Law Faculty of the University of Cambridge specialising in European legal issues.

Inclusion of the comparative dimension brings a fresh perspective to the study of European law, and highlights the effects of globalisation of the law more generally, and the resulting cross fertilisation of norms and ideas that has occurred among previously sovereign and separate legal orders.

The Cambridge Yearbook of European Legal Studies is an invaluable resource for those wishing to keep pace with legal developments in the fast moving world of European integration.

Contents:
1. Disagreement—Commonality—Autonomy: EU Fundamental Rights in the Internal Market
Daniel Augenstein
2. The Proposed Data Protection Regulation: The Illusion of Harmonisation, the Private/Public Sector Divide
and the Bureaucratic Apparatus
Peter Blume and Christian Wiese Svanberg
3. The Import of International Customary Law into the EU Legal Order: The Adequacy of a Direct Effect Analysis
Nicolas AJ Croquet
4. Chinese Curses, Lawyers' Dreams, Political Nightmares and New Dawns: Interesting Times for the UK's
Relationship with the EU
Nicholas Forwood
5. From Hard to Soft: Governance in the EU Internal Market
Vassilis Hatzopoulos
6. The Rise and Expressions of Consistency in EU Law: Legal and Strategic Implications for European Integration
Ester Herlin-Karnell and Theodore Konstadinides
7. The EU and the European Social Charter: Never the Twain Shall Meet?
Urfan Khaliq
8. The Citizenship Paradigm
Dimitry Kochenov
9. The Area of Freedom, Security and Justice in the Light of the EU Accession to the ECHR—Is the Break-up Inevitable?
Alexander Kornezov
10. Co-creating EU Citizenship: Institutional Process and Crescive Norms
Dora Kostakopoulou
11. Neoliberalism and the European Public Procurement Regime
Peter Kunzlik
12. The Ambiguity of Multi-Level Governance and (De-)Harmonisation in EU Environmental Law
Maria Lee
13. Using Comparative Reasoning in Human Rights Adjudication: The Court of Justice of the European Union and the European Court of Human Rights Compared
Christopher McCrudden
14. 'Beggars Can't Be Choosers': Spain and the Financial Crisis
Carlos J Moreiro González
15. Proportionality in EU Law: A Balancing Act?
Wolf Sauter
16. Home Country Control with Consent: A New Paradigm for Ensuring Trust and Cooperation in the Internal
Market?
Pierre Schammo
17. Ready to Do Whatever it Takes? The Legal Mandate of the European Central Bank and the Economic Crisis
Daniel Wilsher
18. From 'Don't Mention the Titanium Dioxide Judgment' to 'I Mentioned it Once, But I Think I Got Away with
it All Right': Reflections on the Choice of Legal Basis in EU External Relations after the Legal Basis for Restrictive Measures Judgment
Geert De Baere
19. The International Responsibility of the European Union—The EU Perspective: Between Pragmatism and Proceduralisation
Andrés Delgado Casteleiro
20. Kadi and the Role of the Court of Justice of the European Union in the International Legal Order
Veronika Fikfak
21. The Law and Political Objectives of the European Neighbourhood Policy in the East: A Difficult Marriage
or Singing in Unison?
Nariné Ghazaryan
22. Beyond the Control Paradigm? International Responsibility and the European Union
Gleider I Hernández
23. Judicial Review of Measures Implementing Security Council Resolutions: The Relevance of the EU Principle
of Loyal Cooperation
Eva Nanopoulos
24. EU Development Policy: Constitutional and Legislative Foundation(s)
Robert Schütze