Fairness in Antitrust: Protecting the Strong from the Weak 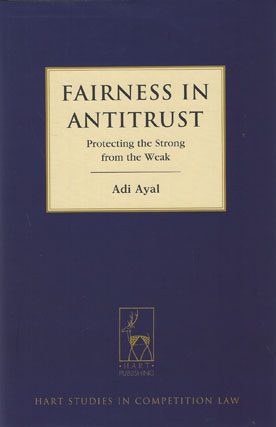 What drives popular support for state-enforced competition policy? What is it about antitrust law that garners approval from both the public and courts, to the point of demonizing large firms convicted of antitrust offenses?

In this book Adi Ayal argues that the populist roots of antitrust are still with us, guiding sentiment towards a legal regime that has otherwise shifted towards economic analysis. Antitrust is very much about fairness and morality; this book assesses how modern policy has hijacked popular support - based on traditional conceptions of political and economic power - to combat market power in narrowly defined micro-markets.

Beginning with history, but delving into moral and political philosophy, professor Ayal shows how arguments concerning fairness in antitrust, applied both to monopolists and their victims, require a balancing test based on context and respecting the rights of both.

While traditionally fairness arguments were used to justify intervention where economic analysis did not, this book assesses them from first principles, to show that pure efficiency analysis is flawed from a moral standpoint when the state intervenes. Protecting weak consumers from strong monopolists may carry rhetorical weight, but the reality of antitrust is that the state is much more powerful than almost all firms it regulates.

Antitrust intervention is thus assessed from two standpoints: fairness towards distinct groups (both consumers and monopolists) and protection of society at large. The first raises issues with the common assumption of consumer-centrality. The second raises the dormant issue of economic power, where firms' influence grows larger than that of the state, and democratic principles require intervention even where efficiency does not.

Protecting the strong from the weak, especially when 'weak' consumers hold legal power and influence, might very well be a moral imperative.

Contents:
Introduction
Part I: The Setting of Antitrust
1.
The Legal and Rhetorical Context of Antitrust
I. The Development of Antitrust Law: Common Law Antecedents
II. Competition Law in Europe: Between National and Community Goals
III. Introducing the Goals of Antitrust: Fairness, Efficiency and Beyond
IV. Terminology and Focus: What is meant by 'Monopolist' and which Rights are Assessed?
Part II: The Goals of Antitrust 2 The Societal Goals of Antitrust
I. The Efficiency Model of Antitrust
II. Competition Beyond Efficiency: Between Proxy and Independent Goal
III. Antitrust as Facilitating a Society of Entrepreneurs
3.
Monopoly's Victims
I. Consumers and their Centrality in the Fairness Discussion
II. Antitrust as a Tool for Protecting Competitors
III. Workers, Local Communities and Small Businesses: The Lost Classes of Antitrust
4.
Monopolists' Rights
I. Why the Verizon Case is Unhelpful: Baselines in Antitrust
II. Who are the Monopolists?
III. Monopoly Profit as a Property Right, or Competition as Creating Property?
IV. Freedom of Contract
V. The Role of Firms
Part III: The Balancing Act of Antitrust
5.
Towards a Constitutional Balance in Antitrust
I. The Need for a Balancing Test
II. Striking a Balance
III. Boundaries to be Respected
IV. Developing the Standard
6.
Formalization of Fairness: Keeping Everyone Envy-Free
I. The Framework of Envy-Freeness
II. Complications and Extensions
III. Implementation to Antitrust
7.
The 'Clear and Present Danger' for Antitrust
I. Protecting Monopolists' Market Access: The Logical Fallacy Argument
II. Logical Fallacy or Balancing Act? Trade and Speech Compared
III. The Balancing Test: Free Speech as a Guiding Force
IV. Implementation to Antitrust
V. Objections to the 'Clear and Present Danger' Standard
VI. Answers to the Raised Objections
VII. A Rebellious Thought Conclusion and Future Implementations