A new edition has been published, the details can be seen here:
The Law and Practice of United States Arbitration 7th ed isbn 9781944825447

The Law and Practice of United States Arbitration 6th ed 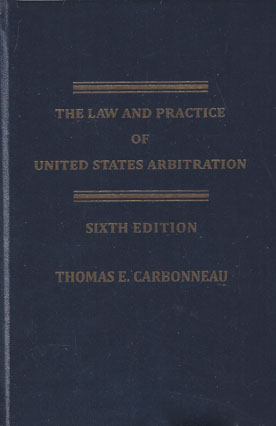 It addresses in detail the recourse to arbitration in domestic matters -- employment, labor, consumer transactions, and business -- and its use in the resolution of international commercial claims. It covers all of the major subject areas in the field and provides practical advice as well as an easy-to-read, clear discussion of the relevant case law.

The Sixth Edition of The Law and Practice of United States Arbitration is based on the reading of nearly 500 recently-decided cases by federal courts and state supreme courts. It also incorporates an examination of contemporary commentary on the subject.

The presentation of the materials has been completely reconfigured, reorganized, and substantially rewritten. The introductory chapter provides essential information on the legal regulation of arbitration and contains a thorough re-evaluation of its status and operation in the American legal system. Because of the consistently favorable SCOTUS decisional law, arbitration has an even greater presence in American law and adjudication.

In addition to a comprehensive assessment of the FAA, the voluminous case law it has generated, and the function of the ‘emphatic federal policy favoring arbitration’, the Sixth Edition updates the law on federalization, federalism, and contract freedom. It describes and examines the judicial disputes that have resulted over arbitration.

The book also describes at much greater length the most controversial sector of arbitration: consumer and employment arbitration. It suggests ways in which to modify the FAA to achieve greater fairness in adhesive arbitration.

The developments in award enforcement---clarification, review on the merits, the status of manifest disregard of the law---are all explained in-depth. Finally, the volume testifies to the fact that arbitration betters our societies and world. On a planet devoid of agreement and flooded with acrimony, arbitration provides a real possibility for prosperity in all nations. It also offers our heavily-invested law students the prospect of a bright career.

Arbitration is not only the pathway to commercial justice, but also it fosters the tolerance of cultural, religious, political, and linguistic differences. It addresses the true challenges of diversity. The Sixth Edition treats arbitration with the understanding and respect it deserves.