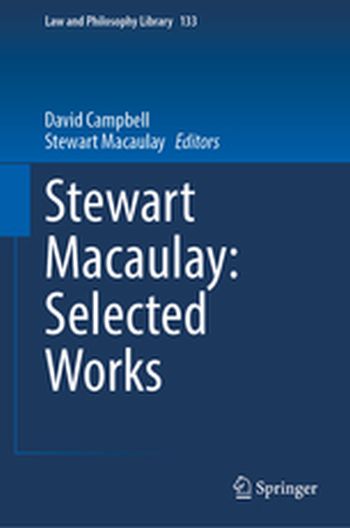 In this work Macaulay has established himself as one of the postwar world's leading scholars of the law of contract and of the sociology of law. His work is an absolute reference point in both disciplines, and it has attracted great attention elsewhere, most notably in economic sociology, where his concept of non-contractual economic relationships is regarded as an important theoretical innovation. Macaulay's work has become an object of commentary in its own right, and the proposed book is intended to assist further such commentary by making hitherto difficult to obtain works readily accessible. Most of Macaulay's work is now, when the leading journals are generally available in electronic form, readily accessible to students and researchers in universities.

There are, however, a number of interesting and in most cases important works published in less accessible journals or works which were not published in an electronic form, which are difficult to obtain. This book will make them readily available, and in so doing will make it possible in future for scholars to have Macaulay's complete oeuvre readily to hand. Although Macaulay's work has provoked very considerable discussion, there previously have been no overall accounts of that work as opposed to critical engagements with aspects of it.

Contents:
Part I: Essays on the Work of Stewart Macaulay
Stewart Macaulay and the Law of Contract
Law in Reality, Law in Context: On the Work and Influence of Stewart Macaulay
Part II: The Uncollected Papers of Stewart Macaulay
The Use and Non-use of Contracts in the Manufacturing Industry
The Standardized Contracts of United States Automobile Manufacturers
Access to the Legal Systems of the Americas: Informal Processes
Professional Competence and the Law
Lawyer Advertising: Yes But... - Private Government
Long-Term Continuing Relations: the American Experience Regulating Dealerships and Franchises
Wisconsin's Legal Tradition
The Impact of Contract Law on the Economy: Less Than Meets the Eye?
Part III: Core Works on Contract
Non-Contractual Relations and Business: A Preliminary Study. Elegant Models, Empirical Pictures, and the Complexities of Contract
An Empirical View of Contract
The Real and the Paper Deal: Empirical Pictures of Relationships, Complexity and the Urge for Transparent Simple Rules
Part IV: Core Works on Law in Context and New Legal Realism
Law and the Behavioral Sciences: Is There Any There There?
The New Versus the Old Legal Realism: "Things Ain't What They Used to Be"
A New Legal Realism: Elegant Models and the Messy Law in Action