Nazi-Looted Art and the Law: The American Cases 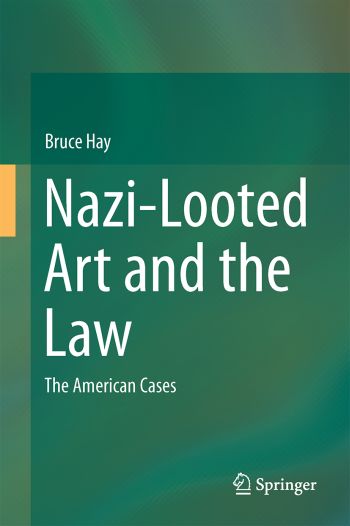 This book offers a clear, accessible account of US cases regarding the restitution of works of art taken from Jewish families during the Holocaust. For the past two decades, the courts of the United States have been an arena of conflict over this issue has recently captured widespread public attention. In a series of cases, survivors and heirs have come forward to claim artworks in public and private collections around the world, asserting that they were seized by the Nazis or were sold under duress by owners desperate to escape occupied countries. Spanning two continents and three-quarters of a century, the cases confront the courts with complex problems of domestic and international law, clashes among the laws of different jurisdictions, factual uncertainties about the movements of art during and after the war, and the persistent question whether restitution claims have been extinguished by the passage of time.

The book offers individual case studies to examine the legal questions they have raised and the answers the courts have given. From the internationally celebrated "Woman in Gold" lawsuit against Austria to lesser-known claims against Germany, Hungary, Spain, and museums and private collections in the United States, the book synthesizes the legal and evidentiary materials and judicial rulings in each case, creating a coherent narrative of proceedings that are often labyrinthine in complexity. Written by an academic authority on litigation and procedure, the book will be of interest to readers in various fields of the humanities and social sciences as well as law, and to anyone interested in the fate of artworks that have been called the last prisoners of the Second World War.