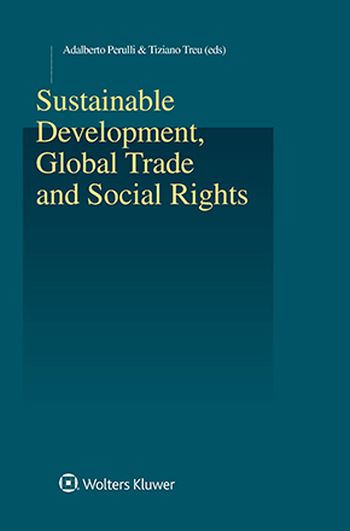 Sustainable Development, Global Trade and Social Rights is aimed at analyzing the most updated aspects of linkage between global trade and social rights. There are two different but converging underlying reasons that forge a linkage between promoting social rights and market regulation: one that seeks to act against distorted competition based on social dumping, which ultimately modifies the best allocation of resources on a global scale; the other refers to the planning of an axiologically oriented global order, designed to redress the unwelcomed social consequences of globalization. Three major fields of international law – trade, the environment and human rights – have become inextricably intertwined in today’s world. A practitioner, policymaker, businessperson, or academic involved in any one of these fields must now be conversant with the other two. The historic link between fundamental social rights and market regulation has proved to be a major topic in the current context of economic globalization, whose trade expansion is a fundamental component along with renewed impetus towards economic regionalism and free trade agreement, including labor provisions. An analysis of MERCOSUR offers a revealing insight into the differences between trade agreements concluded among developing countries and those concluded among developed countries.

This groundbreaking book considers the crucial elements of this complex engagement, with eleven authoritative discussions by some of the most important and widely renowned professors of labor, commercial, and international law and experts from the International Labour Organization and the International Society for Labour and Social Security Law. Focusing primarily on the “social pillar” of sustainability, the authors cover such critical issues as the following:

A much-needed probing of the future of global trade in the light of a resurgence of economic nationalisms, this book takes a giant step towards a new consensus and cohesion phase in the international community where development policies, international business transactions, and social and environmental sustainability coexist harmoniously. It will be welcomed by practitioners, academics, and researchers in trade law, environmental law, and labor law, as well as by policymakers and businesspersons concerned with how these legal fields interact with economic justice.