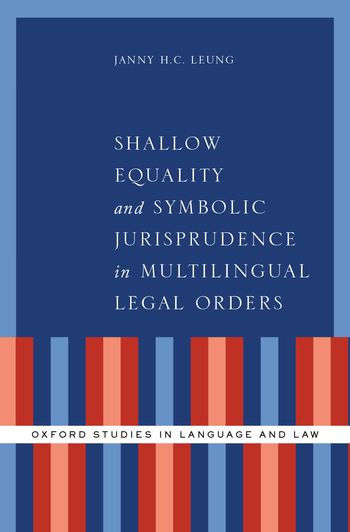 What challenges face jurisdictions that attempt to conduct law in two or more languages? How does choosing a legal language affect the way in which justice is delivered? Answers to these questions are vital for the 75 officially bilingual and multilingual states of the world, as well as for other states contemplating a move towards multilingualism. Arguably such questions have implications for all countries in a world characterized by the pressures of globalization, economic integration, population mobility, decolonization, and linguistic re-colonization. For lawyers, addressing such challenges is made essential by the increased frequency and scale of transnational legal dealings and proceedings, as well as by the lengthening reach of international law. But it is not only policy makers, legislators, and other legal practitioners who must think about such questions. The relationship between societal multilingualism and law also raises questions for the burgeoning field of language and law, which posits—among other tenets—the centrality of language in legal processes.

In this book, Janny H.C. Leung examines key aspects of legal multilingualism. Drawing extensively on case studies, she describes the implications of the legal, practical, and ideological dilemmas encountered in a given country when it becomes bilingual or multilingual, discussing such issues as: how legal certainty and the linguistic ideology of authenticity may be challenged in a multilingual jurisdiction; how courts balance the language preferences of different courtroom participants; and what historical, socio-political and economic factors may influence the decision to cement a given language as a jurisdiction's official language. Throughout, Leung elaborates a theory of "symbolic jurisprudence" to explore common dilemmas found across countries, despite their varied political and cultural settings, and argues that linguistic equality as proclaimed and practiced today is a shallow kind of equality. Although officially multilingual jurisdictions appear to be more inclusive than their monolingual counterparts, they run the risk of disguising substantive inequalities and displacing real efforts for more progressive social change. This is the first book to offer overarching discussion of how such issues relate to each other, and the first systematic study of legal multilingualism as a global phenomenon.