Domestic Application of the ECHR: Courts as Faithful Trustees (eBook) 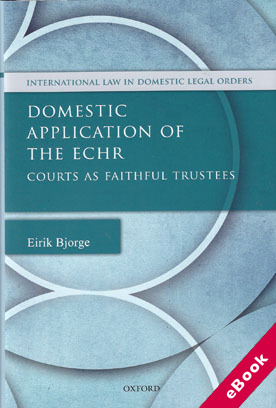 Arguing that it is not true in descriptive terms, nor desirable in normative terms, that the domestic courts take an approach to the ECHR based upon friction and assertion of sovereignty vis-a-vis the European Court. The proper role played by the domestic courts, and the one which they have taken on them to perform is in fact one in which they apply the Convention in all good faith building on the principles set out in the European Court's jurisprudence. Domestic Applications of the ECHR: Courts as Faithful Trustees shows that through their faithful application of the Convention by domestic courts can make a positive contribution to the development of the law of the Convention.

Contents:
1. Introduction
2. The Thesis of the Book
3. Incorporation: Conceptual Relationship between the ECHR and Domestic Law
4. Evolutionary Interpretation: 'The Convention is a Living Instrument'
5. Proportionality
6. The Margin of Appreciation
7. Dialogue
8. Conclusion