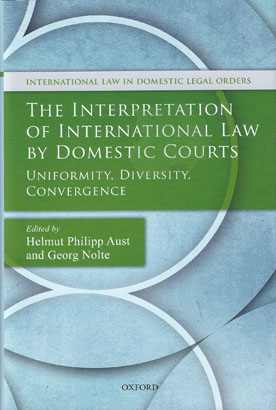 The contributions to this book analyse three key questions: first, whether international law requires a coherent interpretive approach by domestic courts. Second, whether a common or convergent methodological outlook can be found in domestic court practice. Third, whether a common interpretive approach is desirable from a normative perspective. The book identfies a considerable tension between international law's ambition for universal and uniform application and a plurality of different approaches. This tension between unity and diversity is analysed by a group of leading international lawyers from a wide range of geographical, disciplinary and methodological approaches.

Drawing on domestic practice of number of jurisdictions including, among others, Colombia, France, Japan, India, Israel, Mexico, South Africa, the United Kingdom and the United States, the book puts the interpretative practice of domestic courts in a wider context. Its chapters offer doctrinal, practical as well as theoretical perspectives on a central question for international law.