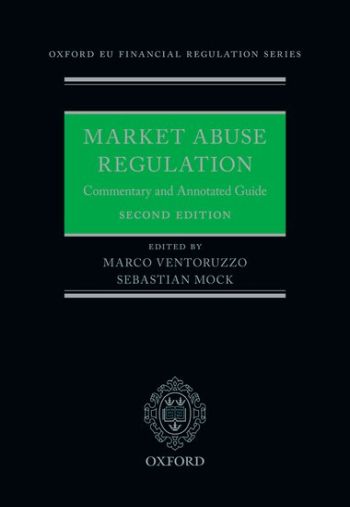 Written by leading scholars in the field of capital markets law from a number of European jurisdictions, the book is divided into two main parts. The first consists of chapters considering relevant issues by topic, including aspects not directly addressed by MAR such as enforcement, and the impact of US securities regulation. The second part provides article-by-article commentary on the Regulation, with a detailed and technical analysis of its terms.

Both parts have been updated to reflect important developments such as amendments to directives and new regulations regarding the promotion of the use of SME growth markets. The second edition includes additional chapters on sanctions. One new chapter deals exclusively with the criminal sanctions (including CRIM-MAD), and another addresses in much greater detail private enforcement in key jurisdictions (France, Germany, Italy, the Netherlands and Spain), which is neither addressed by the MAR nor harmonized by other European legislation. This chapter on private enforcement is also accompanied by another dealing with aspects of private international and international civil procedural law. The existing chapters have also been updated to bring them fully up to date.