Commentaries on the Laws of England: Book III: Of Private Wrongs 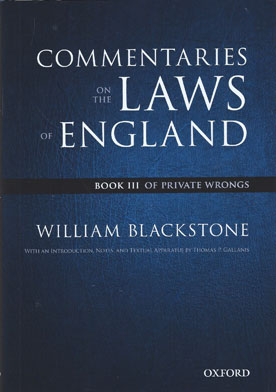 Contents:
Thomas P. Gallanis: Introduction to Book III
Wilfrid Prest: Editorial Conventions
Book the Third: Of Private Wrongs
I: Of the Redress of Private Wrongs by the Mere Act of the Parties
II: Of Redress by the Mere Operation of the Law
III: Of Courts in General
IV: Of the Public Courts of Common Law and Equity
V: Of Courts Ecclesiastical, Military, and Maritime
VI: Of Courts of Special Jurisdiction
VII: Of the Cognizance of Private Wrongs
VIII: Of Wrongs, and their Remedies, Respecting the Rights of Persons
IX: Of Injuries to Personal Property
X: Of Injuries to Real Property, and first of Dispossession, or Ouster, of the Freehold
XI: Of Dispossession, or Ouster, of Chattels Real
XII: Of Trespass
XIII: Of Nusance
XIV: Of Waste
XV: Of Subtraction
XVI: Of Disturbance
XVII: Of Injuries Preceeding From, or Affecting, the Crown
XVIII: Of the Pursuit of Remedies by Action; and first, of the Original Writ
XIX: Of Process
XX: Of Pleading
XXI: Of Issue and Demurrer
XXII: Of the Several Species of Trial
XXIII: Of the Trial by Jury
XXIV: Of Judgment, and its Incidents
XV: Of Proceedings, in the Nature of Appeals
XVI: Of Execution
XVIII: Of Proceedings in the Courts of Equity

Commentaries on the Laws of England: Book I: Of the Rights of People
William Blackstone, David Lemmings
ISBN 9780199600991
Published August 2016
Oxford University Press
£23.49