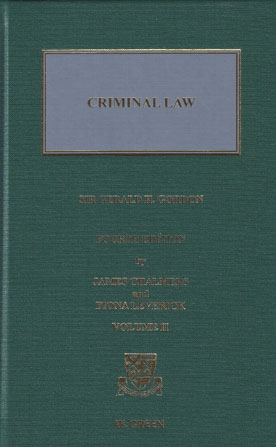 2016 sees the publication of the highly anticipated and fully updated 4th Edition, Volume II of The Criminal Law of Scotland.

This takes into account all statutory and case law developments since the last in 2001, providing the most authoritative and detailed work of reference available on the subject – ensuring the answers you need are found within its pages. Volume II of The Criminal Law of Scotland covers specific crimes, including:-

There has been vast change in the law since the previous edition, including controversial subjects such as the new offences of human trafficking and the Offensive Behaviour at Football and Threatening Communications (Scotland) Act 2012.

Our expert authors James Chalmers and Fiona Leverick has written in depth and detail on these subjects, alongside further key areas of change, including, the creation of statutory offences of threatening and abusive behaviour and stalking in 2010, the replacement of the common law offences of bribery and accepting a bribe with the Bribery Act 2010 and also extensive case law developments in breach of the peace.

The Criminal Law of Scotland is part of the Scottish Universities Law Institute series, a definitive collection of texts on modern Scots law. SULI texts are written by experts in their respective fields, contributing towards the advancement of law in Scotland.

On a practical note, SULI publications are regularly referred to in court, validating the fact that their quality and accuracy is relied upon by those involved at all levels of the Scottish legal system. Every new SULI publication goes through a unique vetting process, ensuring it can be absolutely relied upon and become your ‘go to’ source. The SULI council consists of a team of highly qualified experts who strive to ensure each and every publication is of the highest possible standard.

The SULI series is the only collection of books to have representation from:-